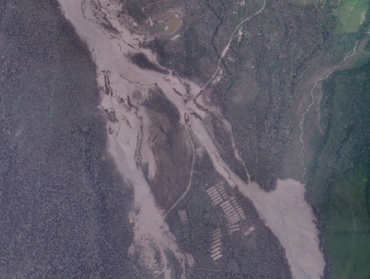 Located in the central region of the Guatemalan volcanic chain, the Fuego volcano is one of the four active volcanoes in the country. Throughout the years the volcano has maintained a constant activity with emanations of lava and explosions that throw materials at altitudes higher than 5,000 meters above sea level. However, on the morning of Sunday, June 3, the activity of the Fuego volcano had a considerable increase. This activity continued to increase until, at noon, a powerful eruption caused one of the worst tragedies in the recent history of our country. According to official figures, 113 people died because of the pyroclastic flow that deposited more than 12 million cubic meters of volcanic material on the southeast face of the volcano's slopes. As a consequence, it is also estimated that more than 300 people were buried under the material, mainly in the community of San Miguel Los Lotes located in the municipality of Escuintla, in southern Guatemala.

During the moments after the tragedy, there was an atmosphere of uncertainty because the authorities did not have the capacity to measure the magnitude of the catastrophe while the information from the place flowed slowly. Likewise, the entities in charge of responding were under a panorama of uncertainty since the eruptive activity of the volcano remained constant, so accessing the so-called "zero zone" was practically impossible. In addition, the high temperatures of the deposited material did not allow access to the places where the impact of the eruption had been greater.

On Sunday night, moved by the tragedy, Aerobots' team scheduled a flight of its autonomous aircraft in order to make a photographic survey of the area affected by the eruption; Pantaleón sugarmill allow the team to use its airstrip for the operation. Early in the morning on Monday, June 4, Aerobots' pilots sent two autonomous aircraft from the sugar mill airstrip, located more than 20 kilometers from zero zone (figure 1). Prior to take-off, the flight above the area was coordinated with the Dirección General de Aeronáutica Civil (DGAC), since the autonomous aircraft flight regulations require such coordination with the control towers responsible for the airspace. Due to the fact that rescue helicopters were flying in the area, it was coordinated to assign airspaces so none of the aircraft, both manned and unmanned, were put at risk. Aerobots were assigned the zero zone airspace 600 meters above ground level, while the rescue ships below that height. Aerobots was in charge of taking aerial photography and taking 360 video of the affected area. More than 2,500 hectares of aerial photography were covered in just over an hour of flight.

The information was sent to the company's servers in Guatemala City and shortly after noon an orthomosaic with a spatial resolution of 0.30 m / pixel was generated (figure 2) and a Digital Elevation Mmodel with a spatial resolution of 1.00 m / pixel (figure 3). This information was the first to be generated because weather conditions (high cloudiness) and volcanic particles suspended in the air, prevented satellites from obtaining images of the volcano. The two products generated were delivered to entities in charge of disaster response such as the Coordinadora Nacional para la Reducción de Desastres (CONRED), entities in charge of generating information such as the Instituto Nacional de Sismología, Vulcanología, Meteorología e Hidrología (INSIVUMEH), and entities of the academic and scientific sector. The next day the information was released on our servers so that it was available to all interested parties from different sectors of the country and with that added efforts to respond to the tragedy. Aerial photography was used as base information for the generation of preliminary cartography of the affected populated areas, and the digital elevation model was used to generate contour lines and for the quantification of the volume of material deposited in the affected area.

Digital Elevation Model (1.00 m / pixel) of June 4, 2018. The image shows the contour lines every 10 meters of the zero zone. The color palette indicates higher altitude above sea level in the reddish colors and lower in the green colors.

The free distribution of the ortomosaic and the Digital Elevation Model made the products available for Guatemalans in entities abroad, such as NASA or the Technological University of Michigan, where experts in Earth sciences analyzed the information and made it available to the scientific community around the world through different web portals. In the same way, both the public and private sectors of Guatemala joined efforts from different entities to use the products and generate new information that was made available to entities in charge of the response, and also to analize and formulate of strategies to reduce the risk of disasters.